PR AGENCIES REPORT WIDE DISPARITY IN BILLING RATES FOR FIRMS OVER $10 MILL VERSUS FIRMS UNDER $10 MILL, ACCORDING TO GOULD+PARTNERS ANNUAL SURVEY.

NEW YORK, August 13, 2015 — The nation’s PR agency field increased their hourly rates in 2014 according to a survey released today by Gould+Partners, the merger and management consulting firm specializing in the PR field. 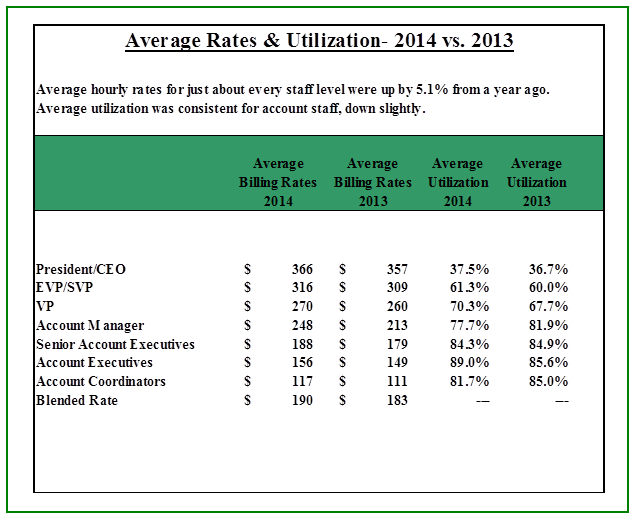 Based on responses from 104 PR agencies coast to coast, and in Canada billing rates are now averaging $480 per hour for CEO’s of agencies with $25 million or more in revenues and $317 among smaller agencies said Rick Gould, managing partner and director of the survey.

Productivity- measured by billable time utilization- has been far below optimal levels, he said. Senior VP’s are billing out only 61.3% of their theoretical yearly capacity of 1700 hours, respondents are reporting, he said.  And while some rank and file account executives are averaging as high as 95%, some are averaging as low as 70%.  The average was 89.0%, which is right on target. “The goal for account executives should be at least 90%, a goal reached by almost all firms achieving 20% profitability.”

Productivity averaged in excess of 91% for account executives in most of the 14 specialties.  “This should be expected for all AE’s not involved in new business and/or management. 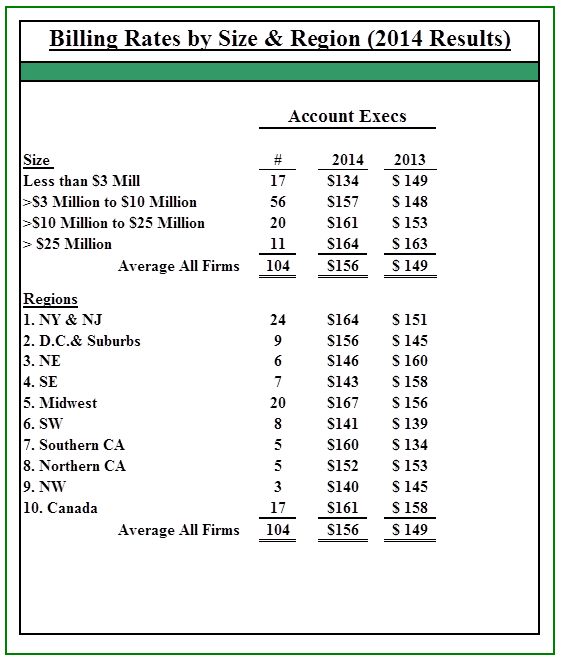 The survey is the annual poll focused on billing rates and agency staff utilization prepared by Gould+Partners which has been conducting other industry wide surveys for 25 years including the recently released Best Practices Benchmarking Report, the industry Growth Reports, The Healthcare/Perks Report and the Executive Compensation report.

After the distribution of the G+P full survey results to those agencies that participated, copies will be available on request after September 1 by writing: [email protected]  or calling Rick Gould directly at 212-896-1909.