NEW YORK, NY, July 6, 2017—North American PR agencies and firms did not increase their hourly rates in 2016, according to a new report released by Gould+Partners, the management consulting firm specializing in PR and PR M&A. 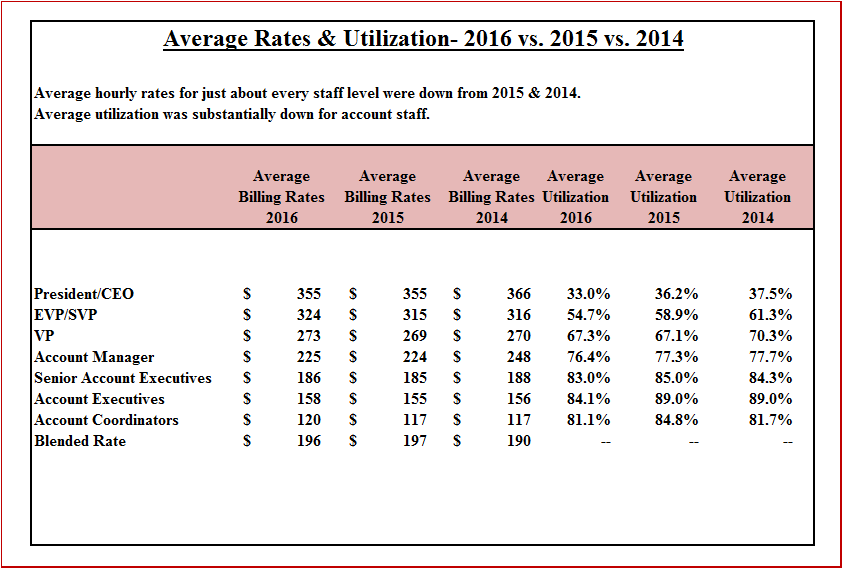 The outlook for hourly rates should be cause for concern among PR firm owners grappling with boosting profitability and increasing valuation, boutique shops an smaller firms in particular.

Based on responses from 101 PR agencies based in the U.S. and Canada, billing rates are now averaging $486 per hour for CEOs of agencies with $25 million or more in revenues and $272 per hour among agencies with under $3 million in net revenues, according to Rick Gould, CPA, J.D., managing partner of Gould+Partners, and director of the survey.

Productivity—measured by billable time utilization—has been far below optimal levels, Gould said. “Account Executives” are billing out only 84.1 percent of their (theoretical) yearly capacity of 1700 hours, according to the survey.

“The aim for account executives should be at least 90 percent, a goal reached by most firms achieving 20 percent profitability,” Gould said. “If PR firms can’t get to that goal, they’re just running in place and that’s going to be very frustrating financially.”

Productivity averaged less than 90 percent for account executives among the 14 PR specialties tracked.

“At least 90 percent should be expected for account staff not involved in management and new business,” Gould added. CEOs averaged 33.0 percent, down from 36.2 percent; for firms less than $3 million in net revenues, utilization was 41.6 percent, down slightly from 42.5 percent.

The survey, an annual poll focused on billing rates and agency staff utilization, is produced exclusively by Gould+Partners. The management consulting firm has been conducting industrywide surveys for 25 years, including the recently released Best Practices Benchmarking Report.

The industry growth report will be released in mid-August.

Following the distribution of the full survey results to those agencies that participated, copies will be available on request after August 1.

For those of you interested in receiving a copy of the survey, please contact Rick Gould, [email protected], or call Gould directly (212.896.1909).

Sign up  for our email newsletter, Inside Edge…Business Strategy for PR, Media & Creative Service Agencies.