In the last several years, women have proceeded to dominate the PR profession. Entry-level gigs in PR are well populated by women. Ditto for middle managers. But when you get closer to the C-suite, the female ranks start to thin out.

When you consider the ongoing influx of women joining the PR field, PR agency owners and managers most likely will need to increase the opportunities for promoting women to the C-suite. The reputation of the PR field depends on it. (Campaigning in Brooklyn, NY, Tuesday, Democratic presidential candidate Hillary Clinton spoke about her plans to promote equal pay for women.)

To get a better handle on how companies can promote women to the C-suite, Weber Shandwick and KRC Research sponsored a survey conducted by the Economist Intelligence Unit (EIU) titled Gender Equality in the Executive Ranks: A Paradox — The Journey to 2030.

The survey, which was released late last year, took the pulse of 327 executives from 55 markets worldwide. It found that nearly three-quarters of global executives (73 percent) believe that gender equality in the C-Suite will be achieved by 2030.

However, a majority of C-level executives (56 percent) report that their company doesn’t have specific goals in place for achieving such an outcome, and only 39 percent of C-level executives report gender diversity in senior management as a high business priority, ranking seventh among 10 priorities.

Rick Gould, managing partner of Gould+Partners, said that despite the above numbers the PR profession is getting better at promoting women to senior management levels. “There are more women attaining C-suite roles in the PR industry than ever before, mainly CEOs and CFOs,” he said. 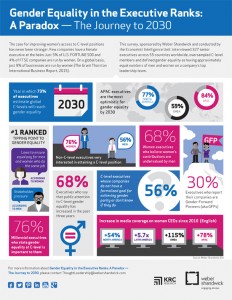 Gould pointed to Karen van Bergen, who in February was named CEO of the newly formed Omnicom Public Relations Group (after serving as CEO of Omnicom-owned Porter Novelli), and Renee Wilson, who in December took charge as president of the PR Council after serving as Chief Client Officer at MSLGroup.

“Women executives know what they want in their agency culture: work-life balance, operational efficiencies, being sensitive to industry profitability benchmarks and looking to outside professionals for counsel and advice,” Gould said.

According to this 2015 Index, only 12.5 percent of senior leaders in the world’s top 100 companies are women.