Alas, paid media, we hardly knew you. Well, not exactly.

However, paid media may not be on the right side of history while “earned media” continues to gain more and more traction within marketing precincts both B2C and B2B.

The report, titled The Earned Media Opportunity, took the pulse of 1,501 marketing executives (B2C and B2B) in the U.S. and Canada.

“Earned media is not a fad,” the study said. “It is here to stay because it drives results with a strong ROI. Earned media’s impact can be amplified by engaging with and nurturing relationships with influencers and blending them into the marketing mix appropriate to each situation. Success depends on using analytics with feedback loops to act on market perceptions.”

Brands and organizations large and small deploy a variety of earned media tools to get their messages out and increase their visibility. 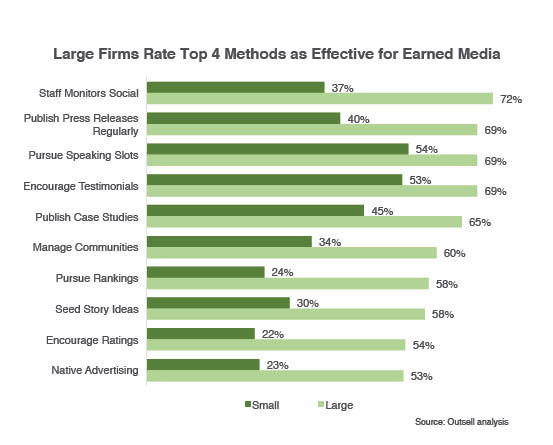 When it comes to user trust in marketing, many of the earned-media tactics—such as testimonials and journalists looking at case studies—were found to be the most effective.

Traditional marketing vehicles, such as TV and radio ads and telemarketing campaigns, were found to be the most intrusive among consumers.

Marketers growing embrace of earned media is also having an impact on their budgeting, the study said.

In Year over Year spending, social engagement and native ads each saw an increase of 10 percent, while PR got a 3 percent hike.

Even though earned media may a key part of the marketing conversation, it generally lags behind advertising and marketing when it comes to doling out budgets. That’s likely to change, but it will be a long slog.

Outsell recommends that marketers use the following components to boost the impact of their earned media efforts:

Use Influencers: Manage very specific and dynamic identification of Influencers. Engage with them and nurture Influencer relationships. Key influencers have an outsized impact. Influencers include the media, IT industry analysts, and bloggers.

“Mind The Mix”: Customize the mix of paid, owned, and earned marketing methods for each campaign and situation.

Earned Media Crisis Control: Improve crisis response to negative “Deserved Media” through proactive engagement with influencers. Deserved Media is a phrase Outsell uses to describe negative coverage of a product, service, or company due to a crisis, scandal, or other turmoil.

Is your firm putting these components to practice? What’s driving your earned media?