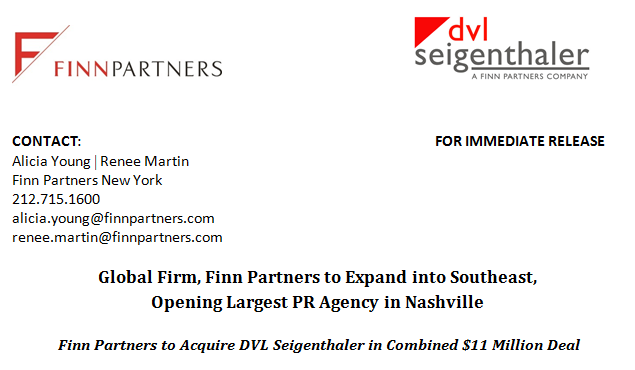 The new combined agency will be known as DVL Seigenthaler, a Finn Partners Company and it will be the biggest public relations agency in Nashville and in the state of Tennessee, and one of the largest public relations firms in the southeastern US. Together the combined operation will have annual fees of approximately $11 million with a staff of 80.  This acquisition will bring Finn Partners annualized fees to approximately $65 million, its total number of employees to 450 and its number of offices to 12.

“It became clear to us that the Nashville region, with its diverse and dynamic economy, is on a very strong growth track,” said Peter Finn, Founding Managing Partner, Finn Partners. “Last year Time Magazine ran a story ‘The South’s Red-Hot Town’ that said  ‘Nashville and its economy are on fire, sparked by a booming cultural scene, world-class health care, rising universities—and a really good spot on the map.’ The region also benefits from major financial services companies and automotive manufacturing plants.”

The article reported that Nashville is one of the fastest growing cities in the US and according to the Time story “has had the strongest employment growth of any large metropolis since the Great Recession.”

Finn continued, “None of the global or national agencies currently operate in Nashville. While our dominant growth strategy has been to build market share where we already have a presence, it became clear to us that there was a great opportunity for Finn Partners in Nashville and the Southeast. We found the perfect firms in DVL and Seigenthaler PR and we look forward to joining forces and tapping this opportunity. Over the past year, we have come to know Ronald Roberts, CEO of DVL and Beth Seigenthaler Courtney, CEO of Seigenthaler PR and we have been very impressed with their business philosophies, with their client bases and with the quality of their work.  An important core value for Finn Partners is to consider ourselves citizens of the world with a responsibility to give back to our greater community, and we are very pleased that Ronald and Beth share this commitment and have been recognized for their many contributions.”

About Seigenthaler and DVL
Beth Seigenthaler Courtney, CEO of Seigenthaler PR, has been named a “Woman of Achievement” by the Nashville YWCA; and a “Woman of Influence” by Nashville Business Journal. Beth has also been recognized as one of Nashville’s most powerful by Nashville Post magazine. Beth serves on the boards of directors of Boys & Girls Clubs of Middle Tennessee, Nashville Convention and Visitors’ Corporation, Nashville Public Radio, Parthenon Conservancy, Southern Alliance for Clean Energy, Tennessee Performing Arts Center and the Women’s Fund. Beth has also been named “Outstanding Volunteer of the Year” by the Nashville Chamber of Commerce.

Ronald Roberts, CEO of DVL, is on the Board of Directors for Citizens Bank & Trust, the Nashville Sports Council, Second Harvest Food Bank, Downtown Nashville Rotary Club, Downtown Partnership and the 100 Black Men of Middle Tennessee. He also serves as the Vice Chairman, Board of Professional Advisors for Middle Tennessee State University’s College of Mass Communications as well as on the Public Relations Advisory Board for Belmont University.  He is a Deacon at Lake Providence Missionary Baptist Church.

Beth Courtney will serve as President and Ronald Roberts will serve as CEO of DVL Seigenthaler.  They will report to Richard Funess, Senior Managing Partner of Finn Partners.

“When we come together with Seigenthaler PR and become part of the Finn Partners team, it will be a natural progression for our firm, representing a new era of opportunity for our clients and employees,” said Roberts.  “We will be pooling our talent, resources and energy for the benefit of our clients, and providing this market with the expansive capabilities of a global agency. DVL is proud of our extensive and sustained client relationships and contributions to the region. Becoming a Finn Partners company enables us to grow and build on our legacy of success.”

“As our market continues to thrive, it is exciting that our agency will come together with our longtime friends at DVL and form a new firm that will build on our collective talent, histories and experiences while providing expanded services and international reach for our clients through Finn Partners,” said Courtney. “Like DVL and Seigenthaler, Finn Partners is rooted in a rich history, and committed to new ideas and communication paths.  We are invigorated by the opportunity to join forces in a manner that heightens opportunities for our employees and clients.”

Rick Gould of SGP Worldwide brought this acquisition opportunity to Finn Partners and facilitated the transaction.

About Finn Partners
Finn Partners was launched in late 2011 to realize Peter Finn’s vision to create a leading public relations agency dedicated to shaping a bold new future in which innovation and partnership are strong drivers of the brand. Finn Partners is ranked as one of the top ten, and also as one of the fastest growing, independent PR firms in the US.  Finn Partners specializes in the full spectrum of public relations services, including digital and social media. The firm’s specialty areas include technology, consumer, travel and lifestyle, education, CSR/Social Impact, arts, health, and public and corporate affairs. Finn Partners was named “Best New Agency” in 2012 and “Best Agency to Work For” in 2013 by the industry’s Holmes Report.  Headquartered in New York City, the company has approximately 450 employees, with regional offices in Chicago, Detroit, Fort Lauderdale, Jerusalem, London, Los Angeles, Munich, Nashville, Paris, San Francisco and Washington D.C., and has Asian and additional international capabilities through PROI. Find us at www.finnpartners.com and follow us on Twitter @finnpartners.